Menu
Four4 is an organisation that aims to provide a space for dance music in Wollongong. A platform for showcasing the rising talent of Wollongong, Sydney and national dance music producers, performers, artists and DJs.
menu 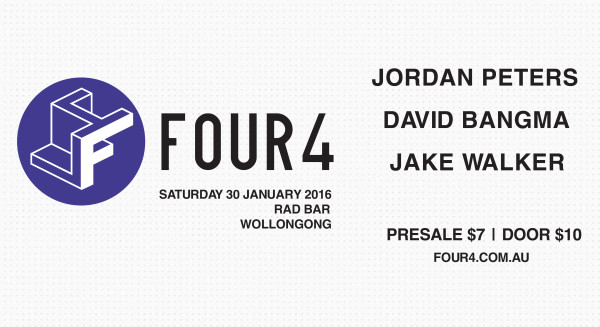 We’ll be getting dark and moody in Rad once more before we follow up next month with some big news regarding our future events. While we will of course be continuing to provide what we feel is a much-needed space for the left field of electronic music in our city, expect bigger rooms, later nights, and even wilder times for Four4 in the future.

Until then though, get on down for a dance on the 30th to help us show our appreciation to Yours and Owls and Rad, who’ve provided us and many others with an amazing space in which to celebrate the good music and people of our city.

To soundtrack this month’s festivities, we’ve called in Sydney-based DJsJordan Peters and David Bangma, who’ll be undoubtedly bringing their characteristically deep, dark and heavy selections to the floor.

Jordan, who runs Anomaly Events alongside previous Four4 guest Gareth Psaltis, has been one of our picks to play since his bone-rattler of a closing set at the Anomaly 3rd Birthday at the Burdekin. Jordan’s been instrumental in bringing the techno scene to the forefront in Sydney, playing alongside and bringing out huge names like Marcel Dettmann, Peter Van Hoesen, Dasha Rush, Abdulla Rashim, Moopie and Rrose.

David, together with Sydney promoter Jemma Cole under the recently-established [ i n s e r t ] moniker, has been likewise host to a string of killer parties of questionable legality and unquestionable entertainment value.

Warming things up behind the decks will again be Four4’s Jake Walker with a vinyl-only set of light, floor-friendly and yet cerebral techno.